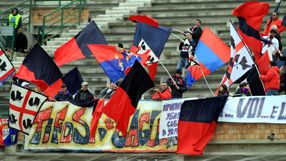 Serie A said in a statement on Friday it had given the green light to the measure for games against Catania, Chievo and leaders Juventus after Cagliari already hosted Inter Milan in the north-eastern city this month.

Cagliari are planning to build a new stadium and move out of the Sant' Elia, which was used in the 1990 World Cup but is badly in need of renovation and only certain sectors of the ground are deemed safe - prompting the move away.

Cagliari said in a statement they were ready to meet the council over stadium improvements while the club also lamented a class action from fans angry at the decision to not play on the island, which lacks any other large football stadium.

Critics have said the club are acting like a franchise by playing in Trieste, a city near the Slovenian border which has no team in the top two divisions and whose nearest Serie A side is Udinese 60 km away.