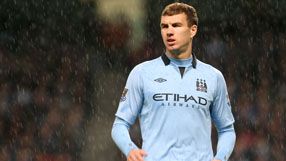 The Bosnian has been linked with a move away from the Etihad Stadium in January amid reported interest in Atletico Madrid striker Radamel Falcao.

But Dzeko, who has scored four times this season, wants to rival the likes of Sergio Aguero, Carlos Tevez and Mario Balotelli for a regular place in Roberto Mancini's team.

"Every time I see a paper, for what seems like a year or more there is a story saying that I am leaving City, or that I want to go," the striker said, as reported by The Sun.

"But I've never said that so the stories don't come from me. I've always wanted to stay at City and fight for my place.

"My motto has always been 'Never give up'.

"I hope the City fans who have always been fantastic towards me have seen I can score important goals for the team and that's what I want to carry on doing."