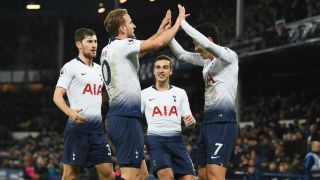 Tottenham produced a devastating display of attacking football as Son Heung-min and Harry Kane inspired the 6-2 hammering of Everton in a Premier League Christmas cracker, moving Spurs to within two points of Manchester City.

The past week had been dominated by speculation linking Mauricio Pochettino with the Manchester United manager's job, and Spurs' attack-minded showing at Goodison Park showed exactly why the Argentinian is a front-runner.

A thrilling first half started positively for Everton and they went ahead through former Arsenal man Theo Walcott, but they gifted Son an equaliser, and Dele Alli and Kane made things worse before the break.

Fine goals from Christian Eriksen and Gylfi Sigurdsson came early in the second half as the entertainment value continued to grow, but Son and Kane got their second goals in the final 30 minutes to emphatically finish the Toffees off.

But they soon shot themselves in the foot, as Kurt Zouma and Jordan Pickford collided when trying to deal with Kane's long pass and Son converted into an empty net.

Alli netted in the 35th minute to move Spurs in front, drilling a fierce strike in from just inside the area after Pickford parried a Son strike.

And Kane opened a two-goal lead just before the break, knocking into an open goal when Kieran Trippier's free-kick came back off the post.

Spurs continued to look rampant at the start of the second period – Eriksen finding the bottom-right corner with a gorgeous 20-yard volley.

But Everton swiftly hit back through Sigurdsson, whose solo run ended with a smart finish from the edge of the box.

The hosts' chances were effectively ended in the 61st minute, however – Son sweeping through Pickford's legs when released by Erik Lamela.

Kane rounded things off late on, turning in Son's cross to complete the crushing of Everton and give the visitors their first points of the season from a losing position.

What does it mean? Spurs hot on City's heels

Spurs have hardly been mentioned at all with respect to the title race this term, but not only does Sunday's result see them close to within just two points of City, it highlighted just how ruthless they can be in attack. If Kane – who has now scored in a brace in each of his last four appearances against Everton – and Son carry on like this, Liverpool might just have another team to keep an eye on.

Everyone in Spurs' attack and midfield impressed at Goodison, but Son was particularly effective, with his movement and ability on the ball constantly troubling Everton's defence. On top of that, he got two goals and an assist in an all-round excellent showing.

A day to forget for Pickford

England's goalkeeper will want to move on quickly from this showing, as he played a pivotal role in Spurs' equaliser, parrying the ball straight to Alli for their second and was bailed out by the offside flag when he clattered into his international team-mate with an ugly challenge just before half-time.

Everton's Boxing Day outing sees them travel to struggling Burnley, while Spurs host a Bournemouth side boosted by Saturday's 2-0 win over Brighton and Hove Albion.