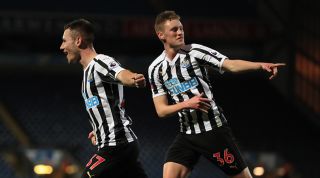 Manchester United are confident a compromise can be reached with Leicester in their pursuit of Harry Maguire, according to The Sun.

The Sun and Mirror both report that United have dropped their interest in Sean Longstaff after being quoted £50 million. They are reportedly ready to walk away from a deal for the 21-year-old midfielder, who has made only nine Premier League appearances and is yet to represent England at any age-group level, as they feel he is only worth between £18m and £20m.

Manchester United target Steven Bergwijn is set to snub a move to Old Trafford and wait for Bayern Munich to make an offer, according to the Mail.

Barcelona are closing in on the signing of Antoine Griezmann after finally activating his £170m release clause, says the Mirror.

Virgil van Dijk: Barcelona enquired about the possibility of signing the former Celtic player from Liverpool, the Mirror reports. But they were quickly given short shrift by the Dutch defender’s representatives.

Bjorn Engels: Aston Villa manager Dean Smith is targeting the Belgian centre-back to boost his side’s defensive options, according to the Mail.