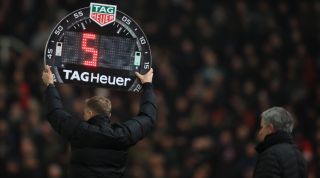 Next season’s Premier League could be as much as five hours longer than previous ones, as experts calculate the impact of the introduction of VAR.

The controversial replay system will be used in England’s top division for the first time in 2019/20, which kicks off on August 9.

With extra time taken by referees to consult with their assistants for video replays, it is expected that stoppage time at the end of matches could dramatically increase – with some games lasting as long as 100 minutes.

Over a season, that would mean an extra five hours, 17 minutes and 56 seconds added to the end of 380 Premier League matches. The average injury time in games over the past few seasons has been four minutes, four seconds.

For contentious calls, referees can take up to several minutes to make a decision – something that was seen on several occasions at the recent Women’s World Cup. After the controversies that arose from that competition, the Premier League announced that video assistance would be applied in a different way to limit the amount of in-play stoppages.

The analysts also calculated that leagues using VAR saw the number of awarded penalties rise by as much 12%. Last season, 103 spot-kicks were awarded and 84 scored – the third-most in a single season in the Premier League. But Spreadex now predicts that the number of penalties scored in a season could top 100 for the first time in Premier League history.

However, the study did not find a significant impact in the number of red and yellow cards dished out.