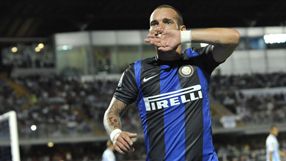 The 28-year-old has not played for the Italian side since negotiations aimed at getting him to accept a cut in wages broke down in November.

"Galatasaray have begun talks with Inter for the transfer of Wesley Sneijder," a statement from the Turkish champions said.

"The public will be informed of developments."

Sneijder, who inspired Inter to their 2010 treble before helping the Netherlands to finish runners-up at the World Cup, has been linked in the media with a move to the Premier League but his large wages have been seen as a stumbling block.