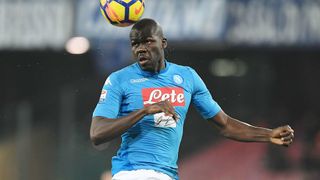 Koulibaly joined from Belgian side Genk in 2014 and swiftly established himself in Napoli's first team, developing into one of the finest in his position in Serie A.

Chelsea have often been linked with a move for him, even before former Napoli coach Maurizio Sarri took charge at Stamford Bridge, while Manchester United are also reported admirers.

De Laurentiis even claimed in July the club rejected a €100million offer for Koulibaly from an unnamed Premier League club, a figure he revised to €90m on Saturday.

But the key issue from the Serie A side's perspective is the 27-year-old looks set for a long stay.

"He has renewed with us for the next five years," De Laurentiis told Sky Sport Italia ahead of Saturday's friendly clash with Liverpool in Dublin. "He is the best in his role.

"We said no to a €90m offer for him. There were three teams ready to take him, but we kept him. Let's enjoy this team, there are those who work for us and are ready to give everything to win."

"He [Malcuit] will arrive on a permanent deal, €12m plus bonuses for a total of €13m," the Napoli chief said.