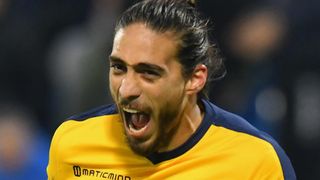 Lazio have announced the signing of former Juventus defender Martin Caceres from Verona on a one-year contract.

The Uruguay international has been attempting to rebuild his career since his final season in Turin was blighted by injury, leaving the club at the end of the 2015-16 campaign.

Caceres made one appearance during a brief stay at Southampton last year, before heading to Verona in the close season, where he has started 14 Serie A matches and scored three goals.

The 30-year-old will now once again be involved in the race for the Scudetto, with Lazio - who have an option to extend the deal - sitting fourth, 11 points adrift of leaders Napoli.