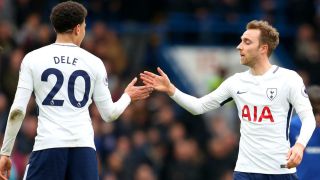 Alli missed the Premier League win over Huddersfield Town at the weekend with a hamstring injury, with Mauricio Pochettino confirming after the 2-0 victory that the midfielder would not be ready to face Barcelona in midweek.

However, Spurs have now confirmed the England international will not play again before the international break, meaning he will also sit out Saturday's league game with Cardiff City.

Defenders Aurier and Vertonghen, as well as midfield duo Dembele and Eriksen, have also been ruled out of the club's next two fixtures, leaving Pochettino light on options.

Still, the Spurs boss is boosted by the return of goalkeeper Lloris for the Group B fixture in Europe, with the France international available for selection after returning to training.

Lloris has not featured since the 3-0 Premier League win over Manchester United at Old Trafford on August 27 due to a thigh problem.

The World Cup winner missed his side's Champions League opener, as they let slip a one-goal advantage in the closing stages to lose 2-1 to Inter in Milan.

Fellow keeper Michel Vorm, meanwhile, is expected to be back in training before the end of the week as he continues to recover from a knee injury.

TEAM NEWS: (hamstring), (abdomen), (thigh), (hamstring) and (thigh) will not be available before the international break.October 2, 2018