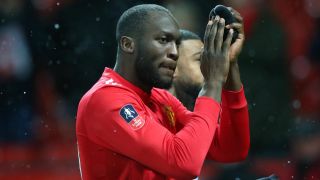 Manchester United are planning for a big off-season after star striker Romelu Lukaku claimed "a lot of good players" will move to Old Trafford in 2018-19.

United invested heavily this season, signing Lukaku, Nemanja Matic, and Victor Lindelof in July before Alexis Sanchez arrived from Arsenal in January but the Red Devils have taken a back seat to neighbours Manchester City this term.

Jose Mourinho's are second and 16 points adrift of City in the Premier League, while United sensationally crashed out of the Champions League in the round of 16 on Tuesday.

And United – who overcame Brighton and Hove Albion 2-0 in the FA Cup quarter-finals on Saturday – are set to be active in the transfer market again, according to Lukaku.

"We are Manchester United, we have to improve every year and I know that a lot of players, a lot of good players, will come in next season. That's for sure," said Lukaku, who scored against Brighton to take his season tally to 25 goals.

"That is something I look forward to, in order to improve the squad, and what the manager also looks forward to because next year we have to win.

"We will have to try and win as many trophies as we can."

Headed goals from and Matic are enough to book 's place at Wembley for the semi-finals.Match report March 17, 2018

Mourinho was scathing of United, despite their victory over Brighton at Old Trafford, accusing his players of being scared to play, while he was also critical of Luke Shaw's performance on Saturday.

The Portuguese's post-match comments came after his passionate 12-minute monologue during Friday's news conference, in which he defended his record as United manager following their 2-1 aggregate defeat to Sevilla.

Despite the scrutiny over United's exploits this term, Lukaku said: "I don't believe we are really that short in being able to compete in the big ­competitions.

"We knew immediately after the game against Seville that we weren't good enough, so we accept the criticism."

Lukaku also leapt to the defence of under-fire team-mate Sanchez, who was an unused substitute in the FA Cup clash.

Sanchez has only scored once in 10 appearances for United – against Huddersfield Town in February – since his high-profile transfer from Arsenal.

"As long as he keeps working hard like he does, I think he'll come good for us," the Belgium international added. "He is a quality player with a lot of assets.

"Look at my situation. I started really well and then had the dry spell in November and December. But at the end of the day with hard work you are always going to get through it."