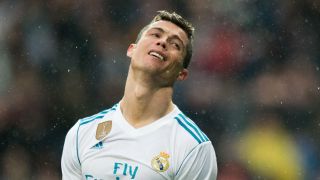 Jose Mourinho cooled rumours linking Cristiano Ronaldo with a return to Manchester United, stating he did not want to make matters worse for "on fire" Real Madrid.

Ronaldo was linked with an exit from Madrid in the off-season having reportedly been unhappy with the club's response to allegations of tax evasion made against him by Spanish authorities.

The Portugal captain remained at the club and has a contract at the Santiago Bernabeu through to 2021, but no agreement has been made for an extension with the forward believed to be demanding more money despite poor form – he has scored six goals in 15 LaLiga appearances this season.

Reports suggest Madrid want to sign Neymar from Paris Saint-Germain at the end of the season and will let Ronaldo go if they are successful, with a return to Old Trafford mooted for the 32-year-old.

Mourinho was keen to avoid making matters worse for Los Blancos - who were eliminated from the Copa del Rey by Leganes on Wednesday and are 19 points adrift of LaLiga leaders Barcelona - by giving merit to the speculation.

"I think with the moment Real Madrid is having now, I think I should be the last one to add some fuel to the fire," Mourinho said at a media conference ahead of Friday's FA Cup fourth-round match against Yeovil Town.

"Madrid is on fire, the results are not good and it's a club where I worked three years. I care about the club, I'm the last one to add fire.

"To put water on the fire I'd say Cristiano is the player every club wants, every manager wants but only one club can have - that's Zidane and Real Madrid."