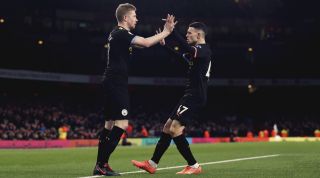 Manchester City's 2-1 win in Madrid back in March has given them a good advantage going into the last-16 second leg, and even a 1-0 loss will be enough to see them through.

Pep Guardiola's side will be hot favourites to progress, but last season's La Liga winners will not go down without a fight. Real are the all-time record winners of this competition, and have come back from far worse than this to lift the trophy in the past. Expect goals.

Kick-off is at 8pm BST and the game is being shown on BT Sport 1/BT Sport Extra 1/BT Sport Ultimate in the UK. See below for watching details where you are.