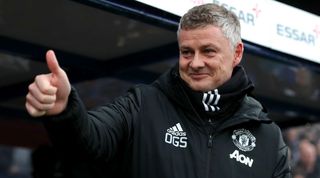 Pye is understood to have been tracked by Arsenal, Manchester United and a host of Premier League clubs for some time.

The 16-year-old is viewed by coaches as having the potential to be a future star for club and country.

He is yet to make an appearance for Sunderland's first team but has been a key player for the under-18s Premier League side.

Pye was called up to the England under-16s at just 14 years of age and has made five appearances since then.

According to the Sun, Manchester United have offered the youngster a five-year deal in an attempt to stump rivals Arsenal.

Ole Gunnar Solakjaer is keen to continue nurturing young talent, as is synonymous with United's history.

The Norwegian coach has already integrated the likes of Mason Greenwood and Brandon Williams into the senior squad.

However, it's unlikely that Pye would be fast-tracked into the senior squad any time soon.

Instead, the Reds' long-term offer is a statement of commitment to his development.

Although, young midfielder James Garner, who made two appearances in the Europa League this season, has been linked with a loan move this month.

Sunderland have themselves been linked with a move for Garner, but it's believed he will only be allowed to leave if the right offer comes in from a Championship side.