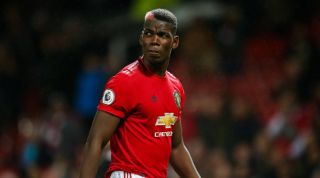 Manchester United and Real Madrid are a long away apart in terms of their valuation of Paul Pogba, it seems.

ESPN reports United are not willing to accept a cut-price deal for Pogba and are still demanding in excess of £150m for the midfielder.

There is a growing belief that the France international will depart Old Trafford this summer, with Madrid among his preferred destinations. Former club Juventus and Barcelona are the others.

Yet there are doubts over whether any of the trio could afford such a large transfer fee, along with Pogba's hefty wage demands.

His agent, Mino Raiola, has been extremely vocal in his criticism of Ole Gunnar Solskjaer and said on Twitter that his client was being treated like a "prisoner." Raiola has since reigned it in slightly and now says the Frenchamn simply wants to get back to full fitness and into the first team.

Pogba is currently sidelined with an ankle injury that has limited him to just eight appearances this season. Solskjaer won't put a timeframe on his return, but he's expected to be out for at least another month.

According to the Daily Mail, Madrid are only prepared to pay £50m for the 26-year-old. That is because Pogba will enter the final 12 months of his current contract this summer - although United do have the option to extend that by a further year.

Apparently the priority for Los Blancos president, Florentino Perez, is to sign either Kylian Mbappe or Neymar.

Juve would struggle financially if they decided they wanted to re-sign Pogba and would have to sell first before they could afford it.