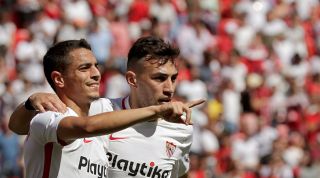 Arsenal are set to make an improved £19 million offer for Celtic’s Kieran Tierney after having an initial bid rejected, the Daily Mail reports. The Gunners were knocked back with their opening £15 million offer but are hopeful of reaching a compromise after Unai Emery identified the 22-year-old as his number-one left-back target, the paper says.

Crystal Palace are considering a bid for Liverpool goalkeeper Simon Mignolet, the Daily Mirror says. The 31-year-old is on course to leave Anfield this summer and is available for around £8 million, the paper claims. Brighton are also said to be interested in the Belgium international.

Laurent Koscielny is reportedly in talks with Arsenal over an early departure from the Emirates. The 33-year-old captain’s contract expires at the end of next season but he may decide that this summer is his last chance to move to another European club, the Daily Telegraph says. Reports in France suggest Lyon and Rennes are among the clubs interested.

The departure of Rafael Benitez as Newcastle manager has led to speculation over who could replace him at St James’ Park. According to the Daily Mirror, four-time Ligue 1 winner Laurent Blanc, former Leicester manager Claudio Ranieri and ex-Feyenoord boss Giovanni van Bronckhorst have already expressed interest in the position. And the Daily Mail names Manchester City assistant coach Mikel Arteta and Burnley’s Sean Dyche as potential candidates.

Meanwhile, the Magpies could see the departure of several of their top stars following Benitez’s exit, according to The Sun. Ayoze Perez is considering a move back to Spain, while centre-half Fabian Schar and keeper Martin Dubravka could also be open to any approaches, the paper says.

Mathis Rayan Cherki: Manchester United are weighing up a bid for the 15-year-old Lyon star, the Daily Telegraph claims. The teenager is said to have also attracted interest from the likes of Real Madrid, Juventus, Barcelona and Bayern Munich.

Wissam Ben Yedder: United are also considering a move for Sevilla striker Ben Yedder, according to the Daily Mirror. The 28-year-old, who is also a target for Barcelona and Paris St Germain, could be seen as a potential replacement for Romelu Lukaku, the paper says.

QUIZ! Can you name the 50 most valuable players in world football?