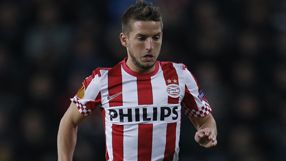 According to reports, both Liverpool and Tottenham Hotspur have been keeping tabs on the highly-rated 25-year-old, who has scored 25 goals in just 40 appearances since joining from Utrecht in summer 2011.

But Belgium international Mertens has admitted he has unfinished business in Holland before he can think about the possibility of a move away from the Philips Stadium.

"As it is I'm very pleased at PSV," he said. "We have a very good team, the atmosphere is great and I am close to Belgium.

"Of course you sometimes think higher. But I still have a sour feeling missing the title last year. That must be put right."