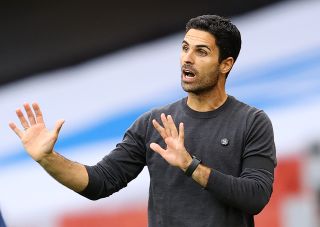 Former Arsenal goalkeeper David Seaman has called on the club to back Mikel Arteta in the transfer window.

Arteta, who could deliver an FA Cup for the Gunners on Saturday, is at the start of a rebuild job at the Emirates Stadium and his first summer transfer window will be an important one.

Finances could be tight as the club battle the impact of the Covid-19 pandemic, and just how much they have to spend could be determined by the outcome of the final with Chelsea and whether Arsenal make Europe or not.

But, speaking to the PA news agency, Seaman urged the Arsenal board to give their manager what he wants.

“It’s a huge game for Arsenal. We need it far more than Chelsea because we need that European place,” said Seaman, who has partnered with Plusnet to release ebook ‘Save It Like Safe Hands’, which gives tips on how to save money.

“To end a season where we are eighth in the league and no European football is not a very good season at all for Arsenal’s standards. We really need it.

“I am so desperate for us to win it. All that desperation comes through the fact that we have not had the best of seasons and we need that European qualification.

“Not just for the club, but also to attract other players as well. I am sure Arteta has got plans to bring players in.

“I just hope the board backs him on what he wants and who he wants, because in Mikel Arteta we have got a really good manager and you don’t want to lose someone like that just because the board won’t back him or give him money to spend.

“When he first joined I was a little bit disappointed because I thought they might have gone with Patrick Vieira because of his time at the club and also his experience, he’s been a manager elsewhere.

“But when I saw his first interview I was like, ‘Woah, this guy knows what he wants’. To do what he has done, I think he has done a great job and that is why the club and the board need to back him.

“They need to buy the players he wants. He knows what he is doing, he will know what he wants and hopefully he can get those.”

Arteta has a decision to make at Wembley, with goalkeeper Bernd Leno back in training after a knee injury.

Emiliano Martinez has filled in superbly for the Gunners and Seaman, who won the FA Cup four times with the club, is backing the Argentinian to keep the gloves.

“I would be very surprised if Leno plays. It is a huge game and Martinez has been brilliant and we have all seen how good he is,” the former England goalkeeper said.

“It is not just all of a sudden, he has been out on loan to a lot of clubs and has done really well. He is 27 now, he has got a lot of experience. It is looking good. It is good for the club that we have got two good goalkeepers.

“On Saturday there is no question for me that Martinez plays because of how well he has been doing. You can’t just put Leno back in for one game. It takes a little while to get up to match speed.”

Seaman, a proud Yorkshireman, has launched the new ebook in celebration of Yorkshire Day. The region is well known for its savvy spending and the publication aims to help people be more ‘Yorkshire’ when it comes to their finances.

He said: “A lot of it is about what it was like when I was growing up, going to the chippy and asking for free scraps.

“We didn’t have one penny too much when I was a lad. We didn’t have an inside toilet or a bathroom until I was 14. To help celebrate Yorkshire Day, I thought it was a great idea.”

:: This Yorkshire Day, Plusnet is giving the nation a Yorkshire-style gift of great value with 25% off broadband and the free Yorkshireman’s guide to value ebook ‘Save It Like Safe Hands’ created with King of Saving David Seaman.