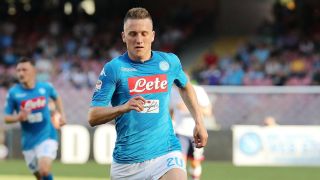 Serie A side Napoli have denied reports Piotr Zielinski injured his ankle in a training ground prank by team-mate Arkadiusz Milik.

Zielinski will be out of action for up to two weeks after spraining his right ankle in training on Friday, the club confirmed.

Reports suggested the midfielder was hurt when Poland team-mate Milik kicked a ball away from under Zielinski's foot.

But Napoli denied that was the case in a statement released via social media.

Contrary to some reports, did not sustain the injury as a result of a prank by ; he merely tripped over in unfortunate circumstances. July 27, 2018

"Contrary to some reports, Zielinski did not sustain the injury as a result of a prank by Arek Milik; he merely tripped over in unfortunate circumstances," Napoli said.

Zielinski's recovery should enable the 24-year-old to be fit to play in Napoli's first Serie A game of the 2018-19 season away to Lazio on August 18.