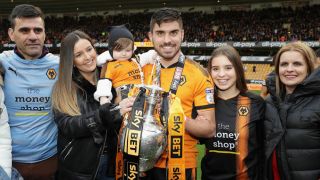 Wolves midfielder Ruben Neves has signed a five-year contract with the newly promoted Premier League side.

Neves was Wolves' standout performer as they won the Championship last season, having joined from Porto in a surprise move reported to be worth £15.8million.

And the Portugal international's performances - including six league goals - had brought speculation that Liverpool and Manchester United could swoop.

The 21-year-old has pledged his future to the Molineux outfit, though, and will be a pivotal figure in their first season in the top flight since the 2011-12 campaign.

Wolves sporting director Kevin Thelwell said: "It is no secret that there has been interest from other clubs, but Ruben is very mature for his age, incredibly level-headed, and loves being a part of the Wolves family.

"Ruben has taken everything in his stride since joining us, and I am positive he will continue his form into next season and have a huge impact on the Premier League."

Delighted to sign a new deal with my club Wolves ay we July 2, 2018