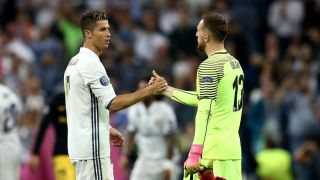 Atletico Madrid goalkeeper Jan Oblak is not getting his hopes up about Real Madrid being slack in the transfer market after losing Cristiano Ronaldo, adamant they will bring in a genuine "star" to take his place.

Ronaldo's Madrid departure came as something of a shock after Portugal's participation in the World Cup ended, the forward joining Serie A champions Juventus.

The Ballon d'Or holder followed Zinedine Zidane out of the club in search of a new challenge after helping them to a third successive Champions League title, the coach leaving because he doubted the team's ability to keep winning after seeing them struggle in LaLiga last term.

Madrid ended the domestic season third behind Barcelona and Atletico, and while Ronaldo's departure is a boost to both of their rivals, Oblak is expecting a major signing to be made, with Neymar, Kylian Mbappe and Eden Hazard the most regularly linked.

When asked if Ronaldo's sale gives Atletico the upper-hand in their rivalry, Oblak told reporters: "Last season we finished in front of Real Madrid.

"Ronaldo is one of the best in history, so Madrid have lost an important player, but I'm sure they will buy another star.

"They will always have a great team, so it will be difficult to say [who has the upper-hand] before the season starts. We will have to see how the season goes."

Oblak himself was tentatively linked with Liverpool towards the conclusion of last season, though it was swiftly established he has a €100million release clause in his contract, effectively ending the speculation.

As such, Alisson became the most expensive goalkeeper in history when the Reds agreed a deal with Roma which could reach €72.5m, and Oblak thinks it is a sign that those between the posts are starting to get noticed.

"Before there wasn't much recognition for goalkeepers," Oblak said. "I think the goalkeeper is important in the team.

"Everything starts from the back and every position is important. The goalkeepers are getting recognition now."