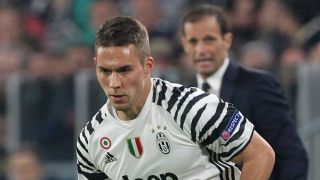 Marko Pjaca could be loaned to Schalke as he bids to improve his fitness, according to Juventus cheif executive Giuseppe Marotta.

Croatia international Pjaca made his comeback from eight months out with a cruciate ligament injury with the Bianconeri's youth team in November, but is yet to feature for the senior side.

Pjaca's agent has accused Juventus of blocking offers for his client, who has reportedly attracted attention from England, Germany, Italy and France.

But Marotta – speaking ahead of Saturday's 3-1 win at Verona – accepted Pjaca could leave Allianz Stadium on loan.

"Pjaca is coming off a worrying and lengthy knee injury," he told Mediaset Premium.

"It is only opportune that he finds match fitness with consistent playing time while out on loan and it could well be Schalke."

Juve are known to be interested in bringing in Emre Can from Liverpool and Pjaca has been mooted as a potential makeweight in that deal.

"Emre Can is a good player and a good opportunity," added Marotta. "That's all I will say for now, and all we have said in the past too."