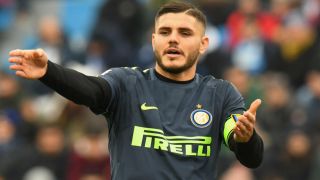 The striker has been linked with the LaLiga champions for much of this season despite signing a new five-year contract with Inter back in October 2016.

Icardi fuelled speculation he could move to the Santiago Bernabeu when he followed a number of Madrid players on Instagram, including Luka Modric and Cristiano Ronaldo, and he posted a picture on Monday with the caption "to be able to say goodbye is to grow".

His boss at international level claims he has spoken to the 24-year-old and knows his head has been turned by Madrid's interest.

"It's a nice problem to have so many players in good form," he told reporters at Buenos Aires airport when asked about his attacking options for this year's World Cup finals.

"I spoke with Icardi and told him what I've told all of them: not to relax, that, if he's doing well, he'll be called up.

"I know that Real Madrid are following him closely. He is also a little tempted by Real Madrid."

Icardi has scored 18 goals in 22 Serie A appearances this season, which is more than Ronaldo, Karim Benzema and Gareth Bale have managed combined in LaLiga.