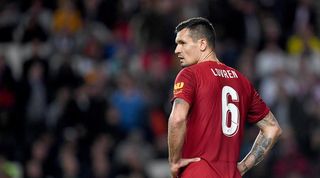 Jose Mourinho has pushed for Tottenham to join Arsenal in the race for Lovren, according to the Daily Express.

Spurs are said to be keen to replace Jan Vertonghen who looks set to leave on a free transfer in the summer.

Vertonghen could follow Christian Eriksen in leaving the club after failing to agree a contract extension.

Arsenal, on the other hand, are keen to add some strength to their backline and Premier League experience may be preferable.

The Gunners are awaiting the arrival of William Saliba, who has been on loan at St Etienne this season.

Mikel Arteta's side saw Pablo Mari and Cedric Soares join on loan in January, but their hunt for yet more defensive reinforcements is expected to continue.

Liverpool's Lovren is in search of first-team football and could be tempted by a move away from Anfield this summer.

The Reds have reportedly set Lovren's pricetag at £18m as they seek to recoup most of the £20m they spent when he was signed from Southampton.

However, Spurs and Arsenal face competition from overseas for the Croatian's signature.

It's understood that Serie A pair Lazio and AC Milan are both keen on signing Lovren, as well as Ligue 1 strugglers Lyon.

The 30-year-old has one year left on his current deal and Liverpool are thought to be ready to sell.

Speaking after Liverpool's loss to Watford a few weeks ago, Lovren cut a disappointed figure.

"It is strange, to be honest. It hurts, really hurts," he said after the match.

"A defeat is a defeat but, you know, this was strange. Maybe it is a wake-up call for us."