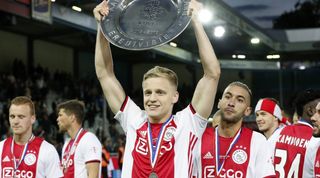 Pogba has been strongly linked with a move to the Bernabeu throughout the summer, but United’s reported valuation of the France international stands at €180 million.

According to Dutch outlet De Telegraaf, the La Liga outfit are ready to move on and concentrate on finding a deal for their ‘Plan B’ option, Van de Beek.

Real are said to be pushing to get a deal done for the 22-year-old, who they have been tracking throughout the summer.

The Holland international helped Ajax reach the semi-finals of the Champions League last season, prompting the sales of Frenkie de Jong to Barcelona and Matthijs de Ligt to Juventus.

Van de Beek could be next to head for the exit and is valued by the Eredivisie champions at around €60 million.