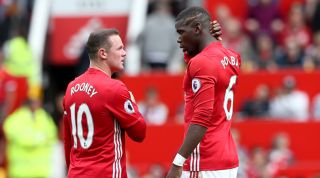 1. Will the division’s Frenchmen escape their rut?

While Paul Pogba’s glitzy return to Manchester was heralded with an impressive debut, his four outings since have displayed none of the authority promised by his pedigree and price tag. A similar assessment can be made on N'Golo Kante, who started his Chelsea career supremely but has since been powerless to prevent his side's meek displays again Swansea and Liverpool.

Back at Manchester United, Anthony Martial has dropped off a cliff since last year’s explosive breakout campaign – all five of his starts so far have seen him hauled off having made minimal impact – and Morgan Schneiderlin’s status as the sole natural holding player at a club whose midfield is in a state of see-sawing disrepair has thus far been enough to earn him a grand total of one five-minute cameo in the league.

Down in the capital, Hugo Lloris and Yohan Cabaye have already seen their seasons interrupted by niggling injury, while Dimitri Payet’s delectable assist against Watford stands as the exception to a largely listless three games. Perhaps most miserably of all, Olivier Giroud’s contribution so far this term can be tallied at three appearances off the bench, zero shots on target and a similar number of his sceptics converted to believers.

It’s not a perfect pattern: Bacary Sagna has been a dependable part of Manchester City’s flawless start, Laurent Koscielny has largely been his usual self and Steve Mandanda has got his Crystal Palace career off to an excellent start.

The league's French contingent has mostly struggled, though. The reasons behind this mass-flounder – fatigue, lingering trauma, good old-fashioned coincidence – are largely a matter for conjecture, but what’s clear is that the group who came within a whisker of such high achievement on home soil a few short weeks ago are going to have to buck up their ideas unless they want their club campaigns to be marked by the same sense of regret.

2. Was Pulis’s champagne football anything more than a perfectly timed fluke?

Before Saturday, West Bromwich Albion had been creeping towards a state of civil war: a nuts-and-bolts manager stuck in his ways, a fanbase who wanted their side to serve up something other than grotesque tedium, and a board who were unconvinced the former needed large stacks of cash to appease the latter.

But far from being a tipping point, Saturday’s visit of West Ham provided a welcome helping of popcorn, as West Brom’s opponents were banished with a crackling display that comprised excitement, spectacle and – count them – four entire goals.

Proof that Pulis can alter his MO after all, and dish up the odd thrill when the occasion demands? Maybe so. But it’s equally likely to have been proof that West Ham’s defending was absurd enough to turn even a pedestrian Pulis outfit into thrill-a-minute freewheelers. Slaven Bilic described his side’s slapstick efforts at the back as “amateurish”, while Alan Shearer on Match of the Day preferred “embarrassing” and “humiliating”. Both men were equally correct.

Saturday may bring a slightly truer test of West Brom's attacking prowess, but only slightly: Stoke City are anchored to the bottom of the table having taken a similarly liberal approach to defending their goal this term, conceding 14 in their first five games.

Should Pulis’s men keep up their Keegan-esque customs, a win up at his old digs could well spell doom for his opposite number, Mark Hughes. The sack would be no small irony, given that Hughes’s remit at Stoke has been to improve on the dreary tripe served up by his becapped predecessor.

3. Who does Klopp pick in attack?

As managerial headaches go, there are worse ones to be faced with. So far this term, Jurgen Klopp’s Liverpool have administered shellackings to the last two champions and last season’s runners-up, each time shorn of a star attacker.

Philippe Coutinho’s two scorchers ensured Arsenal were dispatched without the aid of Daniel Sturridge, but the Brazilian’s absence against Leicester didn’t hinder a similarly stress-free four-goal win. Most recently Chelsea were hounded off their own patch with the side devoid of Roberto Firmino, whose buzzard-like forward play had set the tone for the other two performances – and who returned to the side to orchestrate Tuesday’s dismissal of Derby.

Elsewhere, Divock Origi has two goals in as many starts, while the argument that Adam Lallana and Saido Mane have been Liverpool’s two standout players of the season so far is not far off watertight.

That six players competing for a maximum of four places, with only Origi – himself a firm Klopp favourite on a steeply upward trajectory – who could reasonably be content with a spot on the bench. (And none of that is to mention Danny Ings, who came off the bench midweek after a year out injured.)

All in all – as football parlance would have it – “a nice problem” for Liverpool’s grinning German, but one that will nonetheless demand a harshly punitive team selection for Saturday’s visit of Hull: all six of those players have absolutely earned a spot on the teamsheet, so who will he leave out?

Adrian Clarke: What it was REALLY like for the players when Arsene arrived

How many of English football's first 10 managerial imports do you remember?

Arsene Wenger, as you might have noticed by now, celebrated 20 years since his announcement as Arsenal manager this week. But if the prospect of a milestone occasion for their manager being marked with a meeting with Chelsea is enough to prompt Vietnam-style flashbacks among swathes of Gooners, you might understand why.

Two-and-a-half years ago, Wenger planted himself in the Stamford Bridge dugout and sat back to enjoy his 1,000th game at Arsenal’s helm, only to be treated to the macabre sight of his side given the hiding of a lifetime, 6-0, by their west London nemeses.

And nemeses is no overstatement. Discounting the glorified friendly of last year's Community Shield, it’s five years since Arsenal have beaten Chelsea in any competition, with the aggregate scoreline in the 10 meetings since standing at 17-2 in the favour of Saturday’s visitors to the Emirates.

Recent history, then, may spell grim news for Wenger, but perhaps Saturday could be just the time to reverse the trend. Chelsea’s vulnerabilities were there for all to see as Liverpool dissected them under the floodlights last Friday: chief among them the continued decline of Branislav Ivanovic, the low-key ineptitude of the Gary Cahill-David Luiz partnership (a theme which accelerated midweek), and the desperate form loss of Nemanja Matic.

Antonio Conte could address some or all of these issues through his team selection – but that would mean disrupting what has, with some minor exceptions, been very much a settled first-choice XI. For instance, granting a first league start of the season a certain former Arsenal captain may prove too much to resist after Cesc Fabregas’s match-winning brace in the week, but that would mean heavily compromising on the midfield dynamism Conte so treasures – something Arsenal could take advantage of with the deployment of engine-room hardman Granit Xhaka, who used Tuesday’s League Cup fixtures to press his own case, thumping in his second long-range screamer in four days.

Elsewhere, the pace and directness of Alex Iwobi, fast emerging as one to watch, could be enough to frighten whoever Chelsea pick in their problem right-back spot, and the way the muscular Lucas Perez stampeded through a hesitant Nottingham Forest defence en route to opening his account on Tuesday will have made uncomfortable viewing for a centre-back pairing who have been repeatedly undone by precisely those means in the last fortnight.

Wenger’s Arsenal pummelling Chelsea into submission with pace, ruthlessness and midfield steel? It would be quite the anniversary present.

5. Can Spurs share the goals around in Kane's absence?

Now that spearhead has been removed for at least a few weeks, and the obvious question is how ably Vincent Janssen will take to the ample task of replacing Kane’s goal threat. Perhaps equally pertinent, though, is whether the three behind him can step up theirs. Of the players fielded in that band last season, only Dele Alli chipped in substantively, with his 10 league goals about what you’d expect from a forward-roving No.10 at the sharp end of the top flight. Next to him, Erik Lamela and Christian Eriksen notched five and six respectively, while Son Heung-min managed just four.

While this is by no means a disgrace – let’s remember, all (except Son) were mainstays of a side that performed gloriously last term, with goalscoring only part of their remit – it does leave some yawning room for improvement. With their talisman crocked and his replacement still feeling his way into his new job, those four have little choice but to up their output, and fast.

Given how Middlesbrough's defence were more than happy to wave through a good few waves of Everton attacks during last weekend's 3-1 loss, Saturday's opponents may well prove accommodating.

There has been a theory emerging for some time now – and it is just a theory – that Jose Mourinho’s dream job may well have torched his career.

Or to put it in other words: the overwhelming, goldfish-bowl environment of Real Madrid worked primaily to sow the seeds of self-doubt, self-destructive rage and frazzled paranoia that separate the latter-day Mourinho from the younger, charming, trophy-hoarding, pre-Real Madrid one.

If that theory, at the moment, seems to grow more credible with every passing week, a similar one about David Moyes is also advancing at a similar rate. The Scot’s first couple of months at Sunderland have done no more than his doomed stint at Real Sociedad did to dispel his image, painted during those grim 11 months he spent squirming in Fergie’s throne, of a dour, uninspiring, rabbit-in-headlights coach who sees “flair” as a four-letter word.

That image is absurdly harsh on the Scot, who has proven himself in the past to be none of those things. But perception is everything – and people do change over time, after all.

The burden of proof currently lies on Moyes, and he can start to make his case by injection his Sunderland side with at least some degree of spontaneity. The most obvious source of that is Adnan Januzaj, who has already shown enough in his loan spell to prove he can get the crowd on their feet if he gets the ball at his.

Moyes need only look to Saturday’s visitors – whose current two-game hot streak has coincided perfectly with Wilfried Zaha and Andros Townsend hitting explosive form – to see what a half-decent winger can do to salvage a manager’s reputation.