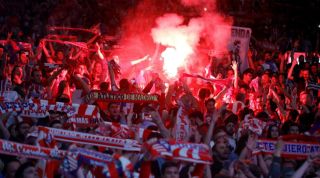 Dusan Tadic scored 23 goals in all competitions during his four years at Southampton. The Serbian star was mostly responsible for providing assists and making the team tick, of course, but Saints fans will be curious to learn that he has scored 22 times already for Ajax this season.

Southampton's decision to sell the 30-year-old last summer was questionable. Granted, Tadic failed to show consistency in the Premier League, but he was their main source of creativity nevertheless, and the club have struggled to replace him.

The player himself has flourished, however, and his performances in the Champions League have been sensational. He prepares to take on Real Madrid in the last 16, and would love to build on his impressive scoring record in the meantime. On Saturday, Ajax are away at ambitious Heracles, and Tadic has the opportunity to equal his all-time Southampton tally already.

On his Premier League debut for Manchester United, Shinji Kagawa was beaten by an Everton side featuring Marouane Fellaini.

Things have never been the same for the Japanese midfielder after his disappointing move to Old Trafford in 2012. There were signs he could become one of the best creators in the world, but that potential remained unfulfilled.

Now he is looking for a decent team once again at the age of 29 – and early signs suggest a loan spell at Besiktas could help. Just look at his debut in the Turkish Super Lig: coming on with just nine minutes remaining at Antalyaspor, he immediately scored twice in a 6-2 win. How about that for a performance to get his new fans excited?

Black Eagles will looking forward to witnessing Kagawa's talents during his home debut against Bursaspor on Saturday.

Gervinho to send Spalletti to China?

Rudi Garcia nurtured Gervinho at Lille, turned him into a star and helped him get his move to Arsenal. Garcia then took Gervinho to Roma in the summer of 2013, after the Ivorian failed to live up to his potential in north London. When the French coach was fired in January 2016, however, his replacement didn't consider the winger to be part of his plans. "He doesn't want to train, and creates problems. He only wants to go away," Luciano Spalletti claimed.

Roma, therefore, were happy to get an offer from Hebei China Fortune: Gervinho was shipped off, and his career at the top seemed to be over.

But he had different ideas. After making a lot of money for doing very little at Hebei, Gervinho made an unexpected and triumphant return to Serie A with Parma last summer. At the age of 31, he has looked unstoppable at times. His mazy runs are a joy to watch, his goal against Cagliari in September was one of the highlights of the season, and has been an unselfish provider too, contrary to his previous reputation.

Last Saturday, Gervinho scored a brace at Juventus, including a dramatic injury-time equaliser in a breathtaking 3-3 thriller. His tally stands at eight goals for the season – and that is in the perfect form to go up against Spalletti, who is having a torrid time at Inter.

Incredibly, the Nerazzurri are still looking for their first league goal in 2019, and most fans want the coach to be fired. Gervinho had a superb game back in September when Parma won 1-0 at San Siro. Another three points for them against Inter, and could the opponents' coach could be sent packing? Perhaps a payday for Spalletti awaits in China. What a sweet revenge that could be for Gervinho...

On Wednesday, Santiago Solari celebrated 100 days as Real Madrid coach with a very good performance in El Clasico, achieving a 1-1 draw at Barcelona in the Copa del Rey semi-final first leg. On Sunday, another tough test awaits him as Los Blancos visit Atletico.

Next, Solari prepares to face his former team when Madrid head to city rivals Atleti this Sunday. He was released as a player when Atletico Madrid were relegated in 2000, promptly joined Real – and the rest is history.

It's a big step forward for the rookie coach. In September, Solari led Real Madrid B against Atletico Madrid B in the third division. The game ended 2-2, with Vinicius Junior scoring twice. Now both will play major roles in shaping the full Madrid derby, while Alvaro Morata – the ex-Real striker – is eager to beat his former club. It's going to be a cracker.

No Mr. Motivator for the Blues

Maurizio Sarri claimed that his Chelsea players are "extremely difficult to motivate", and then proceeded to ponder: "Maybe it's my fault because I'm not able to motivate this group and these players."

Well, who motivated them when the Blues won 2-0 against Manchester City in December? If Sarri is not capable of doing so, someone else must have accomplished the feat.

The Italian's remarks are not only damaging to morale, and harmful to his authority in the dressing room, but they are also undermining his position at the club. One of the most important jobs of the manager is galvanising his players. If Chelsea beat Manchester City again on Sunday, we might assume that the Blues are motivated by the champions even if they don't have a coach at all.

Leon Goretzka celebrated his 24th birthday on Wednesday in a good mood, and not just because Bayern Munich beat Hertha Berlin in the German Cup.

He has scored four goals in three Bundesliga matches since the winter break, showing that he has now acclimatised comfortably following a free transfer from Schalke in the summer.

The versatile midfielder has been considered the great hope of German football ever since making his debut for Bochum back in 2012. Some feared that he might be losing his way after playing just one game at the World Cup and starting his Bayern adventure in a hesitant fashion – after all, the Bavarian giants are not a club for everyone. Yet now he is full of confidence, scoring at will, and has the qualities to become an on-field leader.

Facing his former club on Saturday is a good test, and with another former Schalke man out injured in Manuel Neuer, the spotlight will be on Goretzka.

His name is so distinctive that many automatically assume he is Gianluigi Donnarumma's brother, and some journalists have even fallen foul of the presupposition. Alfredo Donnarumma is totally unrelated to Milan's young goalkeeper, but the two could finally meet in Serie A next year. Alfredo is 28 already, but despite a magnificent scoring record is yet to try his luck in Italy’s top tier.

Last season, he netted 23 goals in Serie B for Empoli – second in the division only to his team-mate Francesco Caputo. While Caputo remained at the promoted outfit, Donnarumma stayed in the second tier with a move to Brescia – and his tally this season is also exceptional, with 19 goals in 18 matches.

Such a ratio is better than that of the entire Carpi team, and Brescia – top of the table at long last – meet their lowly opponents on Saturday. They are favourites to go up for the first time since 2011, and Donnarumma must surely play in Serie A come August.

Lala can afford to ignore Henry

INTERVIEW What’s it like to be on a football scholarship in the USA?

Sometimes, you might need someone to insult you in order to get well-deserved attention. As Strasbourg thrashed Monaco 5-1 three weeks ago, the latter's manager Thierry Henry was heard swearing at opposition full-back Kenny Lala. "Your grandmother is a whore," the coach shouted. A few days later, he was fired – although the incident wasn't as much a reason for his dismissal as the scoreline.

However, fans around Europe began to wonder – who is Lala? The answer is that the 27-year-old has quietly been one of the best Ligue 1 performers of the season.

In his second season at Strasbourg he is flourishing as a right wing-back, and scored an injury-time winner against Bordeaux just days after Henry’s sacking. That was Strasbourg's fourth win in a row and they are now up to sixth place, just two points behind Saint-Etienne in the fight for Europa League qualification. A week ago, Lala provided a fine assist – and Strasbourg triumphed against Bordeaux again, this time 3-2 in the League Cup.

A recent contract extension, taking his current deal to 2021, has not dampened interest from top teams around Europe. Quite a few scouts can be expected in the stands when Lala meets Angers on Saturday.