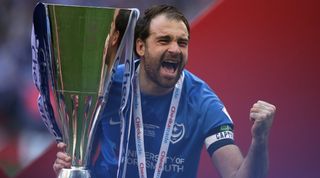 Among the discussions ringing round the football forums this week - title challenges, conspiracy theories, VAR, the eternal futility of trying to correct everybody who’s wrong on the internet - relatively few will centre around the EFL Trophy.

But maybe they should, because this is where young footballers are supposed to become men. On an unglamorous greensward this midweek, a star may be born. And you wouldn’t want to miss that.

A quick backgrounder on what the hell this cup is

In case you’re forgetful, confused or apathetic, the EFL Trophy is the lower-league competition in which, somewhat controversially, academy sides from the big clubs now compete with grown men.

The controversy is twofold. Some see this as the thin end of the wedge by which B-teams will inevitably infiltrate the lower leagues. Meanwhile, in a classic law-of-unintended-consequence farrago, well-meaning rules restricting the rotation that was undervaluing the competition means that managers of lower-league teams are unable to promote their own kids.

But this cup, aimed squarely at the lower leagues and now in its 36th season, has always been an unheralded competition, whether it be called the Associate Members Cup, Football League Trophy, Freight Rover Trophy, Sherpa Van Trophy, Leyland DAF Cup, Autoglass Trophy, Auto Windscreens Shield (Shield!), LDV Van Trophy, Johnstone’s Paint Trophy, Checkatrade Trophy or, as is now, the Leasing.com Trophy. Nobody really cares about it, from boardroom to dugout to pitch to stand, until Wembley hoves into view in the early months of the New Year.

However, at least some interest has been injected by the addition of bigger-club kiddiwinks, which began in 2016/17 and in slightly calamitous style. One by one, Arsenal, Liverpool, Manchester City, Manchester United, Newcastle and Spurs declined to participate, leading to their substitution for somewhat less crowd-magnetising names like Blackburn, Derby and Reading.

However, all of those “big” clubs have now joined in the fun, realising that they’ve got a surfeit of young talent and not much to do with it. There’s only so much that a bright 18-year-old can learn against his peers on a deserted Saturday-morning academy pitch: why not throw him under the floodlights against grown men amid the smell of the Bovril?

How the big clubs have been doing

Each year, the 48 clubs of League One and Two have been joined by 16 Category One Academy teams. (Category One is the standard that costs the most to run, with legislated minimum investment and staffing numbers, but also guarantees the highest pricetags, as per the Elite Player Performance Plan.) Each Academy team visits three lower-league teams in a round-robin group.

Only three academy sides have made it as far as the quarter-finals, one per year: Swansea in 2016/17, then Chelsea (who went one better and reached the semis) in 2017/18, then Manchester City last season. But they are numerical exceptions. For all the fears of gilded youth steamrollering hapless lower-leaguers, the wily auld fellas seem to be holding their own so far.

And so to this season: the worriers…

Here’s good news for any Premier League fans preparing for a fortnight’s cold turkey during the international break: there are 20 EFL Trophy games this midweek to complete the group stage, and some of those games involve Premier League academies scrapping to get through.

Tottenham need a win at Gillingham while hoping that already-qualified group-toppers Ipswich can win at Colchester in the A12 derby. Wayne Burnett’s Spurs side lost at Portman Road and although they gained a modicum of revenge for their seniors by winning a penalty shootout at Colchester – drawn group games go straight to pens, with the winner getting a bonus point and the loser settling for the one – they need a favour from Paul Lambert’s side.

Also sweating on midweek results are West Ham. In their two games so far, Dmitri Halajko’s entertainers have scored eight from six different players, from Brazilian midfielder Bernardo Rosa to Sidcup’s own Dan Kemp. Trouble is, they’ve also conceded eight in a 5-4 win at Newport (from 4-1 down at half-time) and a 4-3 loss at Cheltenham (from 3-1 up at half-time). That leaves them second for now, but if Cheltenham avoid defeat at Newport on Tuesday then the young Hammers will have to match that result at Exeter in Wednesday night’s only EFL Trophy game.

The third team whose fate is in the balance is Wolves. Having won 4-2 at Carlisle – Benny Ashley-Seal grabbing a hat-trick – and edged out Morecambe on pens, they looked set for the knockouts but lost last week at Blackpool and now need Morecambe to deny Carlisle.

Those three swing-votes will decide whether this has been the Academy sides’ most fruitful season yet for getting out of the groups. Seven out of 16 is the best yet, and already six have gone through.

The first academy qualifiers were Manchester City; coupled with last season’s run to the quarter-finals, it seems the young Sky Blues are starting to flex their muscles. They went through with a game to spare by winning at Rochdale and Bradford, before a much-changed XI lost at Bolton, whose 36-year-old centre-forward Daryl Murphy was twice the age of opponents Alpha Dionkou, Taylor Harwood-Bellis, Rowan McDonald and Fisayo Dele-Bashiru.

Youth-obsessed neighbours Manchester United, having finally joined the competition at the fourth time of asking, appear to be taking it seriously. Neil Wood’s side won 2-0 at Rotherham and 1-0 at Lincoln before doing it the hard way at Doncaster, triumphing from 1-0 down via a 94th-minute Mason Greenwood winner.

Chelsea are also a youthful club these days, and the 2018 semi-finalists are through again after wins at Swindon and Plymouth sandwiched a loss at Bristol Rovers. Charlie Brown has led the line for Andy Myers’ side, scoring in the first two games, while midfielder Tino Anjorin has also impressed.

Leicester, too, are a club rejuvenated – and the upcoming generation looks good, winning at Grimsby and Sunderland after a shootout win at Scunthorpe. Central midfielder Kiernan Dewsbury-Hall and striker Josh Eppiah have each bagged a couple of goals and plenty of admiring glances en route.

Brighton, whose academy is central to their future plans, topped their group despite losing their last game at Orient via shootout. Earlier wins at League One drop-dodgers Wimbledon and Southend proved enough. Livewire forward Taylor Richards has looked promising – as you’d expect, for a rumoured £2.5m from Manchester City.

The final academy side already in the hat are Everton. The Toffees had gone out in the groups three times, but David Unsworth’s side – who did the Academy double last year with the Premier League 2 and Premier League Cup – won at Mansfield (on penalties) and Burton before slipping to a penalty loss at Crewe. Anthony Gordon, who scored a belter at Field Mill and set up the opener at Burton, has since been called up to Marco Silva’s seniors for the match at Southampton.

Where there are winners there must also be losers, and this season’s EFL Trophy has already dumped out seven academy sides – including some big names.

Having declined to join the previous three seasons, Liverpool must have wondered why they bothered this time, losing 3-2 at Oldham, on penalties at Fleetwood and 5-2 at Accrington. To be fair to Neil Critchley’s side, they were twice weakened by midweek call-ups to the seniors for League Cup games; Critchley himself might take charge of the League Cup quarter-final next month, with Jurgen Klopp’s side in Doha for the Club World Cup.

Having reached the last 32 in their debut EFL Trophy campaign last season, Arsenal had no such success this time, unless you count a penalty win at Cambridge - which, given they’d already lost at Peterborough and on penalties at Northampton, didn’t count for much at all.

Also waking up too late are Norwich – a win at Crawley came too late after losses at Oxford and Pompey – and Fulham, whose win at Wycombe was rendered useless by previous losses at MK Dons and (on penalties) Stevenage.

At least they got some points on the board, though. Whatever happens at Port Vale on Tuesday, Newcastle are out after losses at Macclesfield and Shrewsbury. Aston Villa have already finished with zip, having lost at Salford and Tranmere in a three-team group diminished by the sad demise of Bury. And then there’s Southampton, whose side lost all three at Forest Green Rovers, Walsall and Coventry. Who said the big boys would bully the lower-leaguers?

Let’s not even try to pretend that the EFL Trophy’s assimilation of top academies has been faultless. But there are some successes, especially now the refuseniks have joined in.

Football’s crowded calendar means there will always be fixture clashes, whether with the EFL’s own League Cup, or international breaks meaning the best kids are called off to training camps and qualifiers. But that’s OK, because those are learning experiences.

And in the end, that’s the point of the better academies joining the EFL Trophy: to give promising youngsters a new challenge. The other side of the bargain is more debatable, but it’s got to be more interesting for fans to see the next generation – whether they end up playing for England or Enfield.

Speaking as someone who shivered in a 1,500 crowd watching the same old faces in the early stages of this competition 30 years ago, barely a season after being among 50,000 in Wembley sunshine at the final, your writer can confirm that a sprinkle of exoticism wouldn’t have gone amiss in those early rounds.

And if some academies do well enough to go deep in the competition, that’s no bad thing either. At the moment, the balance feels about right: we wouldn’t want every Academy side to waltz its group, any more than we’d want to see all the kids get their faces pushed into the lower-league mud.

In the end it may depend on how serious each academy club is about giving youth a chance to play. Manchester United’s line-up at Lincoln included the now-familiar names Tahith Chong, Angel Gomes and Brandon Williams, but their winner was scored by Birkenhead boy James Garner, the former England U17 captain who’s been at United since he was eight. Three midweeks later Garner had swapped the EFL Trophy for the Europa League, making his continental debut for Ole Gunnar Solskjaer in the win at Partizan Belgrade. It may not mean much to everyone, but the EFL Trophy can be a springboard for some. And what’s wrong with that?

On 30 August 2016, the first night that academies played in the EFL Trophy, 3,632 rattling around Bramall Lane watched Sheffield United lose on penalties to Leicester City’s kids. The spot-kick goalscorers included teenagers Ben Chilwell (19) and Harvey Barnes (18), who had one first-team appearance between them.

On the same night 19-year-old James Maddison was helping Norwich Academy tear apart Peterborough 6-1, but a 17-year-old Declan Rice was helpless to prevent West Ham losing 4-2 at Coventry. Neither of them had played for their club’s first teams. But that’s the fun of the EFL Trophy: in an era of blanket coverage and Wikipedia pages for all, it’s a chance to see unknowns with a genuine chance of stardom, like World Cups used to be. And for that reason alone, we’re in. See you on the terrace with a hot drink, a crumpled programme and a puzzled face.

QUIZ Can you name the top five English goalscorers in every Premier League season?