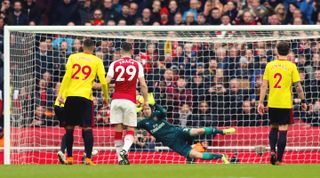 You have eight minutes to guess 36 players.

Petr Cech is 38 today. Really, he could probably still be playing at a decent level.

Cech was the Premier League's greatest goalkeeper - by the numbers, at least. The most clean sheets, the most Golden Glove awards and of course, he was the custodian during that formidable Chelsea season in 2004-05, where the Blues conceded a record 15 goals all season.

Interestingly though, Cech only saved one penalty for Arsenal: in 2018 against Watford. Today, we'd like you to name every keeper who's saved a penalty since.

So no - Alisson against Manchester City doesn't count, because Riyad Mahrez skied it over the bar. Just saves today, please...