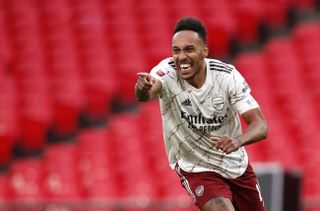 Last season saw a win, a draw and a loss in the three fixtures between these two sides - since they met in the FA Cup quarter-final. Sheffield United would take a goal right now, let alone a win.

The Blades' season has started dismally with three losses in a row. First came Wolverhampton Wanderers, then a 1-0 defeat to Aston Villa after John Egan was sent off. Chris Wilder's side battled well last week - to no avail against Leeds United, who also beat them 1-0.

Sheffield United need to get off the mark as soon as possible. They've lacked creativity in this difficult second season so far and a win at the Emirates would be huge for the club.

Arsenal are also looking to bounce back from defeat, having suffered a 3-1 loss on Monday night against champions Liverpool. Mikel Arteta's side were a lot better defensively in the League Cup victory on Thursday against Jurgen Klopp's side but they too need to start creating more chances if they're to progress up the table.

The likes of Alexandre Lacazette, Ainsley Maitland-Niles, Gabriel and Hector Bellerin will likely come back in from the start for the Gunners, as Arteta looks to shuffle his pack.

Kick-off is at 2pm BST and the game is being shown on Sky Sports Main Event in the UK. See below for watching details where you are.