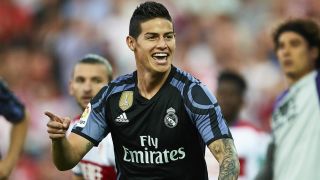 Bayern Munich CEO Karl-Heinz Rummenigge is wary of discussing potential moves for James Rodriguez and Leon Goretzka while the duo are under contract with other clubs.

Reports linking Bayern to Real Madrid star James have intensified, while Goretzka – who starred at the Confederations Cup for Germany – only has one year left on his contract with Schalke.

But Rummenigge thinks confirming the German champions' interest in the pair would hinder them in any transfer negotiations.

He did, however, praise the international performances of Goretzka, the midfielder who has been regularly linked with a Bayern move, and stressed his side were keeping their transfer market options open.

"Everyone has seen that he played well, but I cannot make a serious statement today while he is at another club," Rummenigge said of Goretzka at the presentation of close-season signing Corentin Tolisso.

"I do not want to create any unrest. The player must decide whether he wants to stay with Schalke or change, and then where he wants to go. Nothing has been decided yet."

Asked about James, he said: "I ask for understanding that I cannot reveal our plans.

"I do not want to talk about any rumour because it gets us nowhere. In cases of doubt it makes things more complicated and expensive.

"We will keep all options open until the last day and we will continue to keep an eye on what is going on and discuss options internally.

"We will also look at what is happening in the squad, like in 2014 when Javi Martinez's injury meant we had to act."

Tolisso and Serge Gnabry have been added to Carlo Ancelotti's squad so far ahead of the 2017-18 season, while Niklas Sule and Sebastian Rudy joined from Hoffenheim in deals that were confirmed back in January.

On the way out of Bayern is Douglas Costa, who Rummenigge revealed is close to joining Juventus, while Philipp Lahm and Xabi Alonso retired at the end of last season.