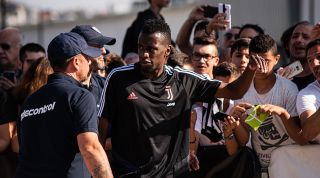 Bayern Munich are eagerly pursuing Manchester City winger Leroy Sané and hope to complete a deal before the transfer window closes, according to the Daily Mirror. Sané, believed to be valued at around £90 million, has been told he does not feature in Pep Guardiola’s starting XI, the paper adds.

Newcastle are closing in on long-term target Stanley Nsoki from Paris Saint-Germain, according to RMC, but the Magpies will have to match the Ligue 1 side’s £13.5 million valuation of the left-back.

Everton are still keen on signing Wilfried Zaha despite Crystal Palace turning down a proposed £50m offer at the weekend, the Daily Mirror says. The Toffees may have to get closer to £60million to prise the forward away from the Eagles.

Neil Etheridge could be making a return to the Premier League this season, with Aston Villa looking to bring in the Cardiff goalkeeper, according to Wales Online.

Harry Arter may be swapping the south coast for south west London, with Fulham looking to bring in the Bournemouth midfielder, reports the Daily Mirror. The Cherries may be willing to sell Arter as they make space for Phillip Billing from Huddersfield.

James is on @atletienglish's shortlist— MARCA in English (@MARCAinENGLISH) July 28, 2019

Tom Heaton: Aston Villa are interested in signing the Burnley goalkeeper but the £10 million price tag is a stumbling block, according to the Birmingham Mail.

Ryan Kent: The Liverpool winger will not be allowed out on loan, with Aston Villa, Rangers and Leeds previously interested in a move reports the Daily Record.