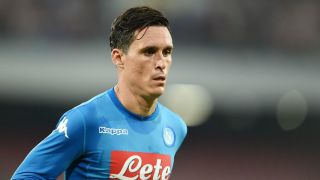 Napoli secured a return to the Champions League group stages as Jose Callejon and Lorenzo Insigne's second-half goals earned a 2-0 win at Nice for a 4-0 aggregate triumph.

Nice had it all to do if they were to qualify for the competition proper for the first time since 1959-60 but in truth they were second-best for much of Tuesday's encounter at the Allianz Riviera.

Napoli, who won their group last season before being dumped out by eventual champions Real Madrid in the last 16, could have extended their overall advantage before the interval with Kalidou Koulibaly, Insigne and Callejon all going close.

Callejon's chance was the most presentable of those but the Spaniard made up for that miss three minutes into the second period when he tapped home Marek Hamsik's excellent low cross from close range.

Nice were temporarily down to 10 men at the time, with Mario Balotelli over by the touchline receiving attention, but neither he nor fellow Champions League winner Wesley Sneijder could inspire Nice, who must content themselves with a place in the Europa League.

Insigne curled a shot against the post almost immediately after Callejon's opener, but did get his name on the scoresheet a minute from time by rifling in from the edge of the box.

Sevilla survived a real scare against Istanbul Basaksehir, progressing 4-3 on aggregate following a nervy 2-2 draw at the Ramon Sanchez Pizjuan.

After losing the home leg 2-1, the Turkish side struck first through Eljero Elia before Sergio Escudero and Wissam Ben Yedder put Sevilla in front. The visitors were not done yet, but could not find the crucial third away goal they craved following Edin Visca's 83rd-minute effort.

Meanwhile, Marko Marin scored the only goal in Croatia as Olympiacos secured a 3-1 aggregate win over Rijeka and Mitja Viler's strike proved enough for Maribor to defeat Hapoel Be'er Sheva 1-0 and qualify on away goals following a 2-1 loss last week.

Earlier in the day, Celtic weathered a second-half storm against Astana who, trailing 5-0 from the first leg in Glasgow, were 4-1 up with 20 minutes remaining until two late goals eased Celtic's nerves as they advanced 8-4 on aggregate - the highest-scoring tie in Champions League play-off history.