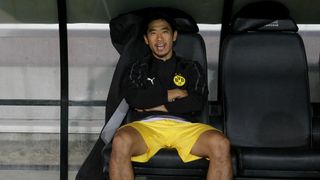 Borussia Dortmund are keen to keep Shinji Kagawa at the club despite understanding the playmaker's frustration at a lack of opportunities, says sporting director Michael Zorc.

Kagawa this week told Nikkan Sports he is planning a move to LaLiga due to him struggling for minutes at Dortmund this season under new coach Lucien Favre.

The Japan international has started one Bundesliga game and made a single Champions League appearance as a substitute since Favre's arrival for 2018-19.

Dortmund are flying high at the top of the Bundesliga and have qualified for the knockout stages of the Champions League, with Zorc planning to hold talks with Kagawa over his future.

"Shinji Kagawa is a highly valued player at Borussia Dortmund," Zorc told a news conference. "He has won the Bundesliga. I totally understand his discontent.

"Lucien and I were both football players and we know if you don't play for a while you'd become unhappy. It is completely normal and it would be bad if he didn't react like that.

"It's legitimate to think about this situation. I said before we will discuss the situation with him after the first leg [of the season]."

Dortmund dominated possession on Wednesday against Club Brugge in the Champions League but could not break the Belgian side down despite recording 930 successful passes, with Favre accepting his team lacked incision.

"Many teams that play against us, especially here, change their system," Favre said. "Brugge have clearly played defensively and were waiting to counter-attack.

"We need to control the game better, play faster and observe more quickly. Our passing needs to be much sharper.

"Too many balls were sloppy. You need to tire those teams, so that they have to push to their limits and we get to play with much more precision and better movement.

"We wanted to win, we always want to win. But we learn every day. I said before, we should have played much quicker and more precise, also, more movement in the right moments. In my opinion, we were moving too little."

Drawing at home to Club Brugge leaves BVB second in Group A, two points behind leaders Atletico Madrid, ahead of next month's final round of group games. Dortmund will visit Monaco while Atletico travel to Brugge.

And Favre is unconcerned about the possibility of Dortmund missing out on top spot, which theoretically could give his team an easier draw in the next round.

"We have already qualified for the round of 16," the coach added. "We could still become group leaders, but I find it funny to focus on that. Of course it is a target, but later you have Napoli, Liverpool and Paris Saint-Germain. Who would you like to play against?

"The question is whether being first in your group will give you an advantage or not. I remember when I was at Gladbach and we were playing in the Europa League, everyone said we need to become group leaders. That's what we did - and then we had to play against Sevilla."