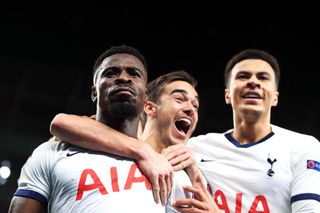 Alli’s close-range finish, Harry Kane’s brace and a rare strike from Serge Aurier saw Spurs qualify for the knockout stages of the competition after the Greek visitors took a shock two-goal lead in London.

England midfielder Alli is seeking to rediscover top form under Mourinho after falling out of international contention during the latter part of Mauricio Pochettino’s tenure.

Here, the PA news agency takes a closer look at the 23-year-old’s display on Tuesday evening.

Mourinho has made it a personal mission to help former MK Dons man Alli return to his best. With the future of Christian Eriksen uncertain, Alli was once again given an opportunity to impress in the attacking midfield role behind Harry Kane after Mourinho stuck with the side which won at West Ham, aside from an enforced change of personnel at left-back. Spurs’ early struggles forced an early substitution as Eriksen was brought off the bench in place of Eric Dier with just 29 minutes on the clock, an alteration which did not greatly affect Alli’s positioning or responsibilities.

A BIG goal before the break!— Tottenham Hotspur (@SpursOfficial) November 26, 2019

Ahead of this fixture, Alli had gone 16 Champions League appearances without scoring. His previous goals in the competition came during a memorable European night under Pochettino when his brace on November 1 2017 proved decisive in the 3-1 victory over eventual winners Real Madrid at Wembley. He had not had a sniff of goal before ending the barren run in first-half stoppage time with a strike which completely changed the complexion of the game. Alli was gifted a simple tap-in after Olympiacos defender Yassine Meriah made a mess of Aurier’s cross and subsequently serenaded by the relieved Spurs fans having made Mourinho’s half-time team-talk significantly easier.

Alli was lauded for his superb improvisation leading to Spurs’ second goal on Saturday at the London Stadium during a performance Mourinho felt had the hallmarks of “the old Dele Alli”. Both he and Spurs struggled to replicate that display during a dismal first half, which prompted #MourinhoOut to briefly trend on Twitter. After claiming the match-changing goal in slightly fortuitous fashion, he grew into the contest after the break. It was his cross, via a flick-on from Son Heung-min, which led to Aurier’s important third, and his energy and marauding runs caused plenty of problems for a visiting defence which appeared increasingly shaky.

Primarily in the side for his offensive qualities, Alli’s height should make him an asset when defending set-pieces. However, he we was among a handful of Spurs players who did not cover themselves in glory for the Greek side’s second goal which came for a left-wing corner. Alli, tasked with marking zonally inside the six-yard box, was momentarily caught napping and unable to recover and block when Olympiacos defender Ruben Semedo escaped the attentions of Toby Alderweireld to poke home.

Few Tottenham players, including Alli, came out of the opening 45 minutes of this Group B encounter with much credit. However, the second period was far better from both a personal and collective perspective. Having plenty a pivotal role in a turnaround which spared Mourinho’s blushes, Alli was given a well-earned rest for the final seven minutes after being replaced by Tanguy Ndombele. Spurs supporters once again chanted the midfielder’s name as he made his way off the field on the opposite side to the dugouts before affording him a standing ovation during his walk around the pitch.