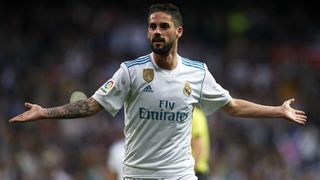 Manchester City will not be signing Isco from Real Madrid in the transfer window, Pep Guardiola has said.

The Premier League champions have been linked with an €80million bid for the Spain international, who has been unable to hold down a permanent place in Zinedine Zidane's plans at the Santiago Bernabeu.

However, Guardiola has been quick to rule out a deal for the 26-year-old, who has a contract until 2022 that includes a release clause of €700m.

"City aren't going to sign Isco," he said simply when asked at an event for the Johan Cruyff Foundation.

The former Barcelona head coach was happy to pay tribute to Madrid's achievement under Zidane, after they claimed a third Champions League in a row last Saturday with a 3-1 win over Liverpool.

However, he has promised City will do their utmost to end the Spanish club's recent dominance.

"It's spectacular, you have to take your hat off to them," he said. "It doesn't matter if they deserve it or not, because it's very difficult to do what they've done.

"They've demonstrated their quality, and we hope to prevent them from taking the fourth consecutive one.

"Zidane has done a spectacular job."