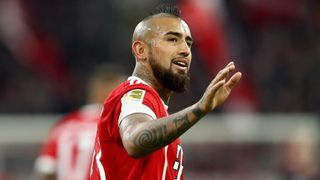 Bayern Munich head coach Jupp Heynckes has denied the club have received a bid from Chelsea for Arturo Vidal and has ruled out selling the player this month.

The Premier League champions have reportedly lined up a £33million move for the Chilean in an effort to bring him to Stamford Bridge during the transfer window.

Chelsea boss Antonio Conte, who won three successive Serie A titles with Vidal at Juventus, has spoken in glowing terms of the 30-year-old in recent weeks and admitted "I'd always want him with me" in December.

Heynckes, however, insists Bayern have no plans to sell any players before the end of the season.

"There's no contact between Chelsea and Bayern," he told a news conference on Saturday.

"We won't sell Arturo Vidal or any other player during the winter market."

Bundesliga leaders Bayern are spending some of the mid-season break in Qatar and will play Al Ahli in a friendly match later on Saturday.

Heynckes does not expect Robert Lewandowski or Mats Hummels to be involved due to minor injuries but could give a start to new signing Sandro Wagner, who joined from Hoffenheim on January 1.

"My players have been really excited to travel to Qatar. It's great fun with the players," he said.

"Robert Lewandowski has brought his injury from the first half of the season with him here. I hope he can train again with the team on Tuesday.

"Mats Hummels has had adductor problems during the winter break.

"Wagner has been well received. He can become an important player. Before, we had no alternative to Lewandowski."