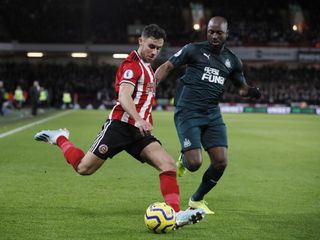 Newcastle United have emerged from lockdown with the possibility of a divisive Saudi takeover hanging over them. Results have been better than expected this season, with many fearing a relegation battle when Steve Bruce took charge last year. The reality hasn't been anywhere near as bad as that, with the Toon sitting in a comfortable 13th position with nine games to go.

Sheffield United, meanwhile, are unexpected European hopefuls, with Chris Wilder's tactically astute squad the surprise package of the season. A win in the far north will set them in good stead for the run in. Hopefully with no goal-line balls-ups this time!

Kick-off is at 2pm BST and the game is being shown on Pick, Sky Sports Premier League, Sky Sports Main Event, Sky Sports Ultra HD and Sky One in the UK. See below for watching details where you are.