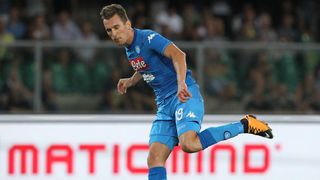 Arkadiusz Milik has suggested a loan switch from Napoli may help his recovery from a knee problem, with rumours suggesting Chievo as his likeliest destination.

The Poland international suffered a second serious knee injury in as many seasons last month, when he limped off after coming on as a substitute during the second half of a 3-2 win at SPAL.

Milik subsequently underwent surgery and is expected to be out for around four months.

It has been suggested the striker could seek a temporary switch in order to get regular game time once fully fit, with opportunities set to be limited at Napoli thanks to the devastating form of Dries Mertens, Lorenzo Insigne and Jose Callejon, which has propelled the Partenopei to the Serie A summit with eight wins from eight.

"I don't rule out a loan to another club. It would be a quick way to recover to be at 100 per cent as soon as possible," Milik said in an interview on Polish television.

"I had my operation three weeks ago. The knee is still a bit swollen, and it hurts me sometimes, but I feel better every day and for the time being the rehabilitation is going well.

"I'll start doing pool exercises soon, then there will be a period of cardio work.

"In these situations the mentality is very important, the first two weeks were the hardest, but time has passed. I want to thank the people who support me with messages and photos."