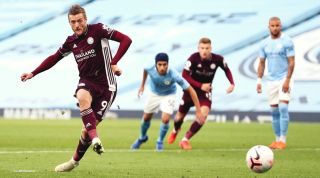 Leicester's 5-2 victory over Manchester City was emphatic, as the Foxes capitalised on sloppy defending to win three penalties. It was the first time any side had inflicted five goals on Pep Guardiola as a manager and now Brendan Rodgers will be looking to prove that this rich vein of form can continue against West Ham.

The Irons have just pulled off a hell of win themselves. No one expected them to knock an impressive Wolves side for four - especially with David Moyes coaching from home - but West Ham were mightily impressive.

This promises to be an exciting clash between two sides high on confidence.

Kick-off is at 12pm BST and the game is being shown on BT Sport 1, BT Sport Extra and BT Sport Ultimate in the UK. See below for watching details where you are.

WATCH THIS GAME Get a Now TV pass week here