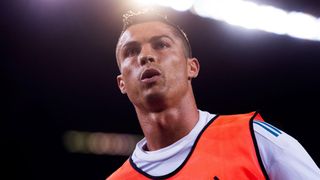 Tottenham goalkeeper Hugo Lloris has described Cristiano Ronaldo as "an inspiration for the new generation" as he prepares to face the Real Madrid attacker.

Lloris will be charged with the unenviable task of trying to prevent the Portugal star and his team-mates from hitting the back of the net when Spurs take on the Champions League holders at the Santiago Bernabeu.

Ronaldo has helped Madrid to win the competition in three of the last four seasons, breaking scoring records and earning individual accolades including the Ballon d'Or along the way.

"He is an inspiration for the new generation, a machine of success with individual trophies and collective success," Lloris said of the 32-year-old forward.

"He is a great leader and a great personality too. He has made a great impact on Real Madrid and the success of Real Madrid.

The players have joined up ahead of tomorrow's match against ! October 16, 2017

Ronaldo has thrived under the coaching of Zinedine Zidane, who is already an idol for fellow Frenchman Lloris thanks to his exploits as one of the world's best attacking midfielders.

"He is a legend in France and an inspiration for most of the players of my generation," Lloris said.

"He won everything. He has great personality and was a legend as a player and I am not surprised about his success, even if I know football is even harder as a manager because of the pressure.

"But what he has achieved for Real Madrid is fantastic. Seven titles means a lot – and the way he has managed so many of the best players."