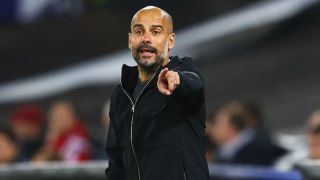 The Lilywhites have been worth the wait so far on their return to the Premier League after 16 years away, with 15 goals being scored in their three matches so far.

And Bielsa will chase an upset after overseeing back-to-back victories and watching Guardiola’s side collapse to a 5-2 defeat at Leicester last weekend.

There are no injury issues in the Leeds squad, but they face one selection blow as on-loan midfielder Jack Harrison can’t face his parent club.

Ezgjan Alioski appears set to step into the starting line-up, with Pablo Hernandez still facing more time on the sidelines.

Manchester City splashed a reported £65 million on Benfica centre-back Ruben Dias during the week, and the Portugal international could go straight into Guardiola’s team as he looks to tighten up a leaky defence.

Fellow defender Aymeric Laporte is also in contention to start for the first time this season, having recovered from Covid-19.

These two sides haven’t faced each other in a competitive fixture since a 4-0 FA Cup victory for City in 2013, while the last time they faced off at Elland Road Leeds ran out 2-1 winners in March 2004.

With eight, Leeds have equalled the record set by Bolton in 2001 for the most goals scored by a promoted team after three games. Five of them have come from set pieces, the most in the division.

The Spaniard has reason to be confident though, as he is undefeated in three previous head-to-heads with Bielsa, winning twice when his Barcelona faced the Argentinian’s Athletic Bilbao in La Liga.

Got a strong opinion on how it will turn out? Check out live betting odds with our Win Probability Widget below.

Kick-off is at 5.30pm BST and the game is being shown on Sky Sports Premier League, Sky Sports Main Event and Sky Sports Ultra HD in the UK. See below for watching details where you are.