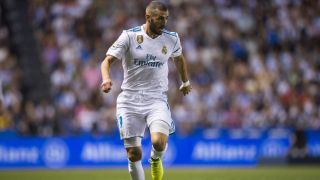 Karim Benzema is the best centre forward in Europe, according to his Real Madrid team-mate Marcelo.

Marcelo netted the final goal in Madrid's 3-0 victory over Eibar, as Zinedine Zidane's side moved back to within five points of La Liga leaders Barcelona.

Madrid's lead came courtesy of a sparkling first-half display from Marco Asensio, who created the opener before hammering in the second 10 minutes later.

Benzema replaced Asensio on the hour, providing an outstanding assist for Marcelo's goal during a superb cameo performance, and the Brazil full-back was quick to heap praise on the Frenchman, who was defended by Zidane following a poor miss against Tottenham in the Champions League.

"Karim is a fantastic footballer. We have Cristiano [Ronaldo] who scores so many and Asensio who chips in," Marcelo said.

"It's a logical thing that people want more goals from Benzema and the strikers, but you saw today is what else he offers.

"His movement, his passing and his control - he's the best number nine in Europe."

Madrid's win keeps them within touching distance of Barca, and though they were not at their best, the margin of victory would have been extended had Ronaldo - who only broke his duck for the LaLiga season with the winner against Getafe last time out - converted a glut of golden opportunities.

Despite Ronaldo's woes, however, it proved a comfortable triumph, and Marcelo believes Zidane's side are getting close to recapturing their best form.

"We're in good shape. The people forget it's difficult to play here against a defensive team - against good teams," Marcelo continued.

"It costs to win, you need patience. We scored three goals but what got us here is how we pushed together and now we have got back to within five points of the top.

"We will all give everything, from the bench or from the start. It's not one guy, it's everyone working together."