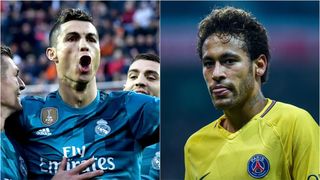 Depending upon which narrative you chose to embrace, Neymar will either look to start a Paris Saint-Germain dynasty in which he is the jewel when they face Real Madrid in the Champions League or turn in an audition to be the Santiago Bernabeu's latest galactico.

The Brazil forward was apparently motivated in part by his desire to win the Ballon d'Or when he swapped Barcelona for Paris last August and dumping the reigning European champions out at the last-16 stage would certainly do much to further his ambitions.

Madrid's reported courting of Neymar has much to do with Cristiano Ronaldo's perceived decline over recent months but the Portuguese icon appears to be coming good at just the right time.

Quietly – by his standards – Ronaldo has scored seven goals in his past four LaLiga outings and, as the business end of last season's Champions League showed, he is almost without parallel when it comes to the big occasion.

Whether Neymar is Ronaldo's future team-mate, replacement or latest rival is a debate that will run beyond this mouth-watering tie. For now, we can see how the duo's statistics stack up this season with the help of Opta data.

27 – Neymar is scoring at exactly one goal per game across all competitions. Ronaldo has 23 in 28 matches after his recent spurt, although his average of a goal every 102 minutes is his least efficient return since joining Madrid in 2009.

5 – Both players have boosted their tally by converting five times from the penalty spot, although Ronaldo has not been forced to argue with Edinson Cavani beforehand.

188 – Ronaldo has taken on a huge number of shots on goal and has been outscored by Neymar, despite his rival only attempting 126. They have registered 72 and 58 attempts on target respectively.

14 – Neymar has laid on almost three times as many goals for his PSG team-mates than Ronaldo has managed at Madrid, with five assists. The ex-Barca favourite has created 89 chances to Ronaldo's 35.

318 – The incredible number of dribbles attempted by Neymar at home and abroad this season, with 189 completed. Ronaldo has attempted 59 and completed 35.

Despite a diminished return against his own improbable efforts from previous years, Ronaldo remains an expert goal-getter, while Neymar is breaking new ground for himself in that regard.

The statistics concerning each player's wider performances are perhaps more instructive. Ronaldo's days of tearing off on relentless dribbles and runs appear to be fading into the past, while tormenting opponents in this fashion is second nature to Neymar, who is clearly the more adept creator of the two.

Perhaps those seeing Neymar as Ronaldo's potential replacement at Madrid are on to something when it comes to superstar appeal and marketing imperatives but missing the point in terms of matters on the field. While both are supreme forwards, they are different kinds of attackers. Neymar probably has more in common with the 26-year-old Ronaldo than this version.

The narrowing focus of Ronaldo's talents and Karim Benzema's trials as Madrid's number nine means a full-time conversion to playing as a striker makes increasing sense. Neymar remains at his best when operating across the entire canvas. They would be breath-taking in tandem and on Wednesday both men represent contrasting keys to victory.