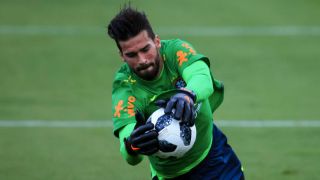 Roma are still yet to receive any calls from clubs interested in signing goalkeeper Alisson or defender Kostas Manolas, according to Monchi.

Speaking to the media at the presentation of new signing Javier Pastore, the Italian club's sporting director made clear he has yet to be contacted by any potential buyers interested in either player.

Brazil international Alisson has been linked with Liverpool, who knocked Roma out at the semi-final stage of the Champions League in the 2017-18 season.

Real Madrid - who benefited from two goalkeeping errors from Loris Karius to defeat Liverpool 3-1 in the final in Kiev - are also said to be keen on the highly rated 25-year-old.

"Up to today we haven't received any offers for him," Monchi said of Alisson.

"My thoughts on the matter are to wait until [after] the World Cup, hoping for his and Brazil's sake that it doesn't come too soon for them, then he can rest and come here to train with his team-mates.

"I repeat - up to today there has been no offer for Alisson.

"If you asked me the same question about [Patrik] Schick's future I'd say the same thing. There have been no calls made to the director of football's office with offers for him."

Spaniard Monchi also responded to speculation over Manolas' future in the Italian capital, with the centre-back reportedly a target for Chelsea.

Media speculation has suggested the Premier League side could be ready to pay the buyout clause in the Greece international's contract, rumoured to be in the region of €38m.

"I've spoken to Kostas three or four times, he enjoys my job and might make a decent director of football himself!" Monchi said.

"He's happy with the team and wants to stay. I've read that Chelsea want to pay the buyout clause, but I haven't heard anything. I feel calm."