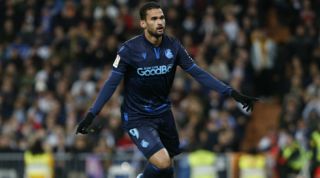 Real Sociedad striker Willian Jose is reportedly heading to London in the hope of completing a move to Tottenham Hotspur.

Kane suffered a hamstring injury during Spurs' 1-0 loss to Southampton earlier this month.

The injury was worse than first feared and the England captain required surgery - ruling him out until April.

According to AS, Jose is due in London to finalise a transfer to the North London club imminently.

At 28, Jose is a seasoned striker who Spurs hope can make an instant impact in the Premier League.

The Brazilian international has scored eight goals in 21 La Liga appearances for Real Sociedad this season.

His contract expires in 2024 and includes a £59m release clause, but it's reported that a deal will likely be agreed below that figure.

Jose signed for Sociedad in 2016 for £5.4m, so the deal could be extremely profitable for the Basque outfit.

As Jose is one of the key players for Sociedad, the Spanish club are believed to be keen to wrap up the transfer so they can find a replacement before the January window closes.

Spurs just managed a win against Norwich City on Wednesday night, thanks to a 79th minute winning goal from Son Heung-Min.

However, Mourinho will be hoping he can relieve the pressure on his other attacking players by providing them with a centre-forward focal point once again.