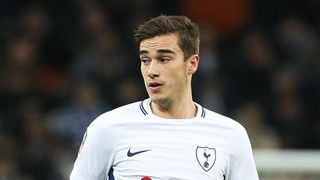 Harry Winks has agreed a new Tottenham contract, signing an extension that will keep him at the Premier League club until 2023.

Winks, who has been restricted to nine Premier League starts this season and has not played in 2018 due to injury, won his first England cap last year.

The 22-year-old came through the Spurs youth system and has reportedly been given the nickname 'Little Iniesta' by Mauricio Pochettino.

Winks will now undergo ankle surgery but is expected to be fit to return in time for pre-season ahead of the 2018-19 campaign.

Cameron Carter-Vickers has also signed a new contract with Spurs, the defender's new deal running to 2021.

"I'm delighted to sign a new contract," said Carter-Vickers, who spent the 2017-18 season on loan in the Championship with Sheffield United and Ipswich Town.

"The next step for me is to come back for pre-season, get my head down, work hard and try to impress the manager and as many people as I can."