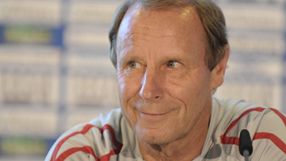 "I still have a two-year contract and at the moment I plan to fulfill it," Vogts told reporters in Baku, Azerbaijan on Friday when asked about Polish media reports.

"But in football anything can happen," he said.

Polish radio station RMF reported on Thursday that Polish FA chief Grzegorz Lato had confirmed the choice would be between Vogts or Polish coach Waldemar Fornalik, who is in charge of local side Ruch Chorzow, at a meeting on June 27.

Poland finished last in Group A with two points after draws with Greece and Russia before losing their decisive final match against the Czech Republic.

The 65-year-old Vogts won the 1974 World Cup with West Germany as a player before guiding Germany to the 1996 European Championship crown, their last major title victory.

He has also coached Kuwait, Scotland and Nigeria.