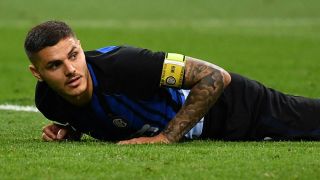 Mauro Icardi has admitted he could leave Inter in the next transfer window - but only if it is in the best interests of the club.

Luciano Spalletti's side suffered a 2-1 loss at home to Sassuolo on Saturday, leaving their hopes of finishing in Serie A's top four hanging by a thread.

The San Siro result secured Roma third place and, if they beat Crotone on Sunday, Lazio will join their neighbours in securing the final spot in next season's Champions League.

Icardi has been linked with a move away from the Nerazzurri in the past, while UEFA's financial fair play rules could see Inter forced to cash in on their prized asset.

The Argentina striker - who has scored 28 league goals - has confirmed he will discuss his future with Inter at the end of the season.

"I repeat every year, I will speak to the club," Icardi told Sky Sport Italia.

A free-kick from Matteo Politano and Domenico Berardi's wonder strike sealed Sassuolo a league double over Inter, who pulled a goal back through Rafinha but still suffered a disappointing defeat on home turf.

Icardi praised the performance of visiting goalkeeper Andrea Consigli, leaving Inter - who travel to Lazio next weekend - likely to finish in fifth place in the final table.

"We are very disappointed, we could not take the three points we expected," he added.

"Sassuolo played a great game; their goalkeeper [played] the game of his career. If the ball does not want to go in, there's not much you can do, but we tried anyway."