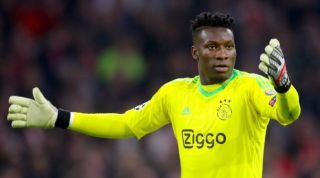 Manchester United could submit a bid for Ajax goalkeeper Andre Onana next summer, according to reports.

Onana is one of the most highly-rated young shot-stoppers in Europe, with the 23-year-old one of Ajax’s star performers in last season’s Eredivisie title triumph and run to the Champions League semi-finals.

He has also started the current campaign well, helping his side to the top spot in the Eredivisie thanks in part to a record of just nine goals conceded in 13 games.

Ajax are expected to receive several offers for the Cameroon international at the end of the season, with Barcelona having been strongly linked in the past.

And Old Trafford has now emerged as another potential destination for Onana, who recently told BBC Sport that he would be interested in playing in the Premier League in future.

That comes as a slight surprise given the fact the David de Gea signed a new deal worth £350,000 per week just two months ago.

De Gea’s form has tailed off in the last couple of seasons, though, and United may be looking to the future with their interest in Onana, who is six years younger than the Spaniard.

However, De Gea is now one of the Premier League’s best-paid players and will have almost certainly sought reassurances over his position at the club during contract negotiations.

Tottenham are also keeping tabs on the Cameroonian, with club captain Hugo Lloris set to turn 33 in December.

Lloris is out of action for the rest of the season with a dislocated elbow, but it would be extremely difficult for either Spurs or United to prise Onana away from Amsterdam before next summer.

Ole Gunnar Solskjaer’s side moved up to seventh place in the Premier League table following Sunday’s 3-1 victory over Brighton, although they remain nine points adrift of the top four.

12 hilarious times outfielders went in goal (including the chairman's son