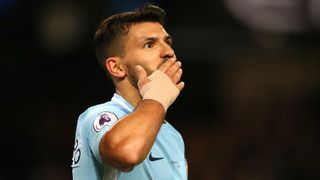 Sergio Aguero has been named in the PFA Premier League Team of the Year for the first time, with Manchester City dominating the 2017-18 selection.

The Argentina striker has been included alongside Harry Kane and Mohamed Salah, the leading candidates for the Premier League's Golden Boot, in a three-man attack.

Leroy Sane is the only nominee for the Premier League Player of the Year prize not to make the team.